What is an Ad Server?

Ad serving technology has come a long way since it was first introduced in 1995. Technological advancements have led to ad serving becoming the key driver in the growth of digital advertising. In this blog post we will cover:

What is an Ad Server?

In basic terms an ad server is the technology platform used for serving ads to online media, be it websites, social media, apps or video platforms, known as Publishers. Ad servers allows Publishers to create ad zones within their content which are then sold via the ad serving platform to Advertisers who bid for the ad zone, the highest bidder wins the ad zone. Ad serving platforms are used by individual Publishers who want to monetize their content with various ad zones, Advertisers, who want to promote and sell products to end users viewing the publisher site and Ad Networks who want to act as the ‘middlemen’ by monetizing a network of Publisher and Advertiser clients.

How are Ads monetized?

For the purpose of keeping things simple, we will concentrate on the main types of monetisation of ads:

How does an Ad Server work? 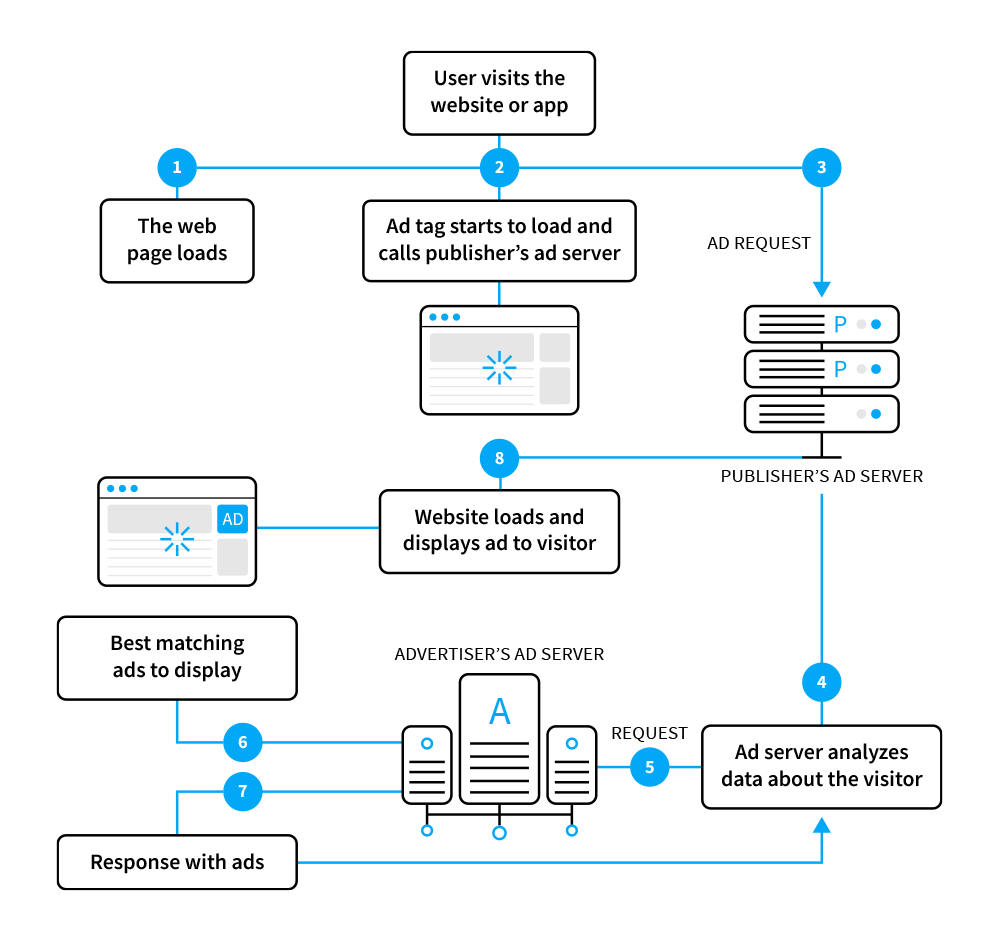 When an end user visits a Publisher’s website or app, it begins to load. The browser sends an ad request to the Publisher’s ad server to fill in an ad placement on the webpage. So let's say the Publisher has a banner display ad zone, the Publisher’s ad server selects a relevant banner ad creative from a campaign that is matched with the Advertisers set targeting parameters. If it matches, and is the highest bid, the winning banner ad is displayed on the Publisher's ad zone for the end user. The ad impression, end user click or end user view is registered by the ad server and appears in the advertisers dashboard in real-time, everything happens in milliseconds.

Publishers use an ad server to manage where their ad placements will be displayed on various web pages, what the ad format for each ad zone is, for example display formats such as Banners and Interstitials, Video, Native, Push Notification, Popunders, etc. It gives Publishers full control over their ad inventory with access to statistics for each ad format and ad zone. As well as the ability to optimize ad zones for maximum revenue potential. This is known as a 1st-party ad server, because the Publisher is supplying the inventory to sell.

Advertisers use the ad server's features to upload their ad creatives for a range of different ad formats, launch campaigns with a range of targeting features which helps them save money by being more precise as to what type of end user they want to reach. Advertisers then bid for their targeted inventory to try to win the Publisher ad zones. Additionally Advertisers can further optimize their campaigns in real-time by tweaking the targeting features, changing their bids and getting real-time data reporting to analyse metrics such as clicks and ad creative performance. This enables the advertiser to block ad zones that have a low performance and create ad zone white lists of high performing ad zones. This is known as a 3rd-party ad server because the Advertiser is demanding the inventory to use.

Ad Networks use the ad server as a single platform to match Publishers with Advertisers to serve a large range of ads of different formats across to all devices that an end user might be browsing with. And then monitor Advertiser and Publisher metrics and performance from a single dashboard. This combines first and third party ad servers in one place.

What is Programmatic Advertising? 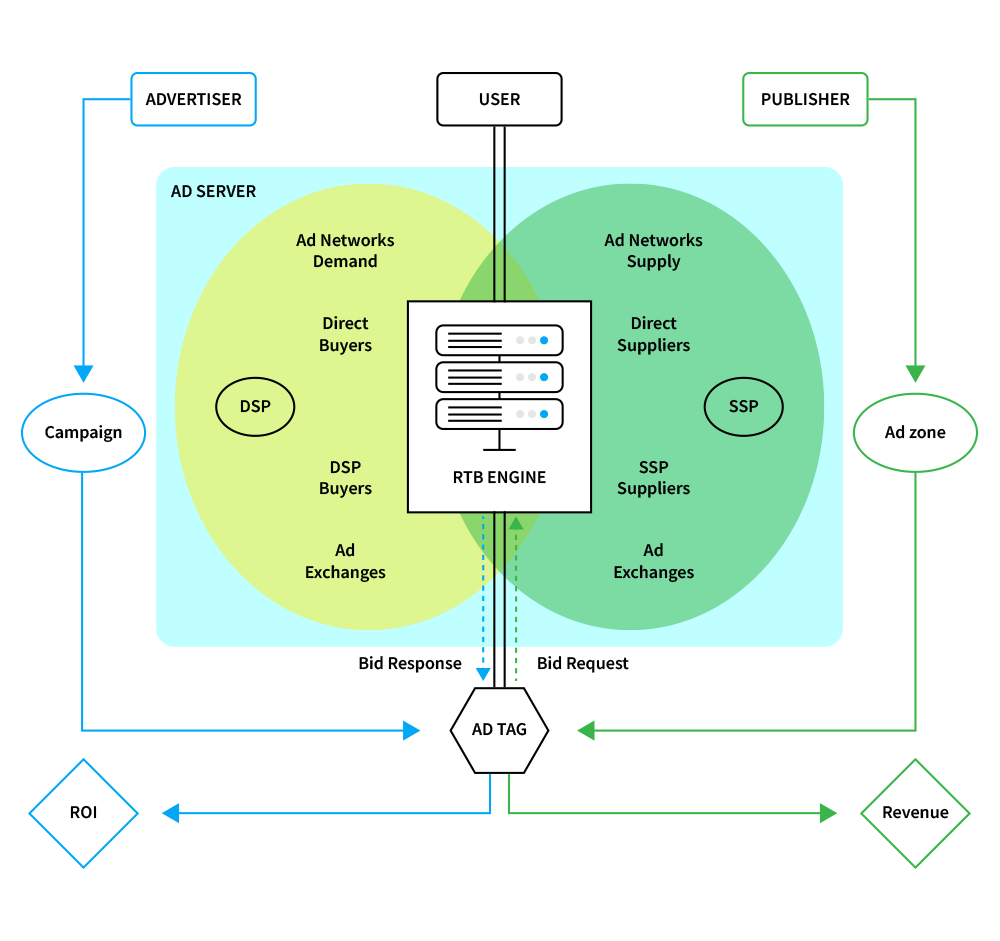 In digital advertising, the term “programmatic” is frequently used interchangeably with the term “automated”, meaning that once the terms of an advertising deal are locked-in, a programmatic ad campaign is executed automatically according to those terms. The bidding happens in milliseconds via Real-Time Bidding (RTB) also called RTB programmatic, which uses real-time buying and selling of ad impressions through auctions that occur in the split-second it takes for a website to load.

What are the Common Ad Formats?

The Interactive Advertising Bureau (IAB) is an organisation that represents the digital marketing and advertising business ecosystem, providing the framework for the technological specifications and best practices of implementing the various ad formats used within the online advertising industry. An ad server should provide IAB industry standard ad formats. Because Chrome is by far the most popular web browser, ad formats should also be fully compliant with regulations set by Google and the Better Ads Coalition. These regulations are put in place to provide a great end user experience when viewing websites and their ad zones. The most popular types of ad formats include:

More about Video Ads: What is VAST and VPAID?

Serving ads into video players is different to serving ads into other parts of a website, this is why VAST was created for the ad industry. VAST stands for Video Ad Serving Template and it provides a generic framework for embedding in-stream and in-video ads. It is designed to facilitate and standardize the communication between video players that are embedded on a publisher’s website to display videos and ads with a video ad server.

The video ad server is used by advertisers to host and serve their video ads and count their impressions, views, clicks and other data. Based on ad requests from a VAST tag, the video ad server will return the ad creatives along with criteria such as how the video ad will be played (e.g. pre-roll, mid-roll, post roll and on-pause) along with all the tracking metrics.

VAST Wrappers are common in the video ad serving industry. One of the benefits of using a VAST wrapper is that it allows a third party to insert their own tracking events and receive notification of when certain events occur (for example, when the video starts to play, video completion, clicks, etc).

VPAID (Video Player-Ad Interface Definition) which is a common interface between a video player and ad slots, enables additional functionality beyond standard video playback such as viewability and adding interactivity to the ad. VPAID is a specified type of file which is delivered via a VAST tag.

In order to use VAST and VPAID with video ad formats, top ad servers, such as EXADS, support these standards and can integrate seamlessly with all the main industry standard video players such as FluidPlayer, VideoJs, JWPlayer and FlowPlayer.

What is Conversion Tracking?

Conversion tracking is essential for advertisers because it identifies various parameters to evaluate how well an ad campaign is performing by tracking predefined conversion goals. It tracks each of the campaign's conversions with an accurate monetary value, it tracks metrics such as Conversion Rate, Profit, Revenue, ROI, so that an advertiser can further optimize their campaign. You can see how Conversion tracking works in our case study. 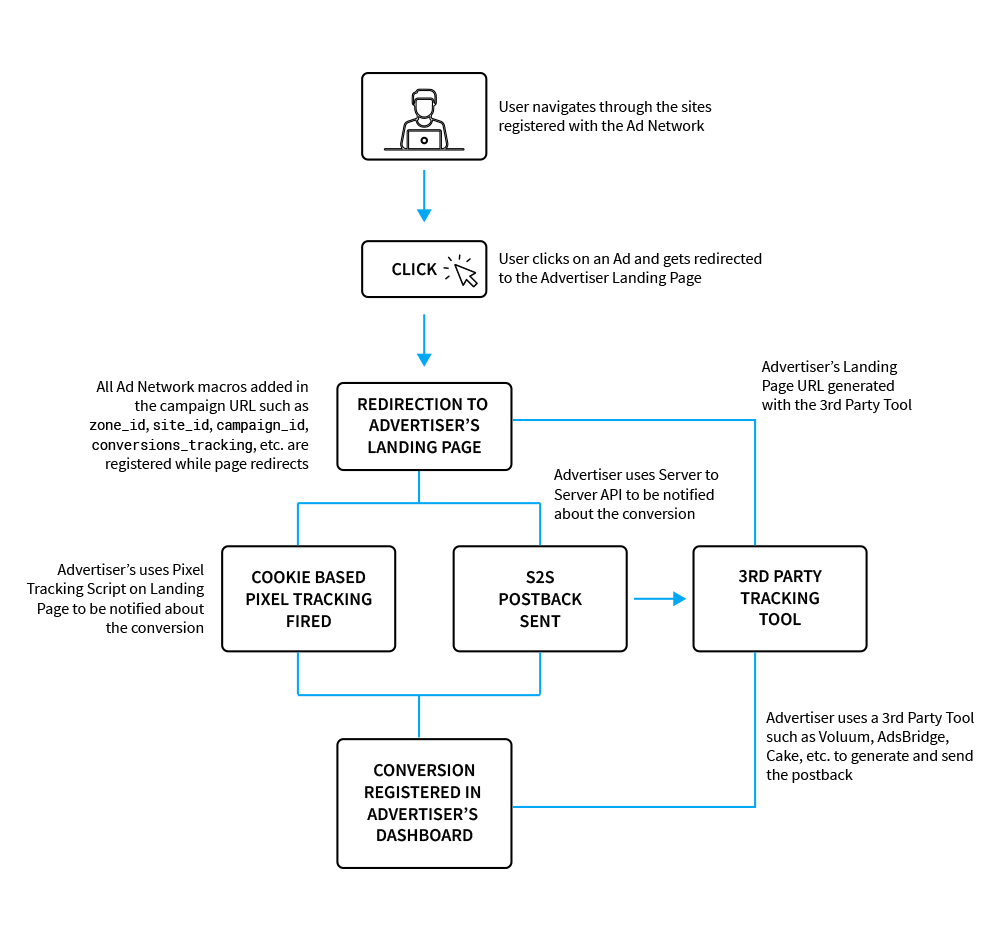 Ad servers like EXADS offer S2S (server to server) conversion tracking via an API and Pixel tracking which identifies conversion actions from a piece of HTML code on a campaign's landing page. Additionally, EXADS allows for the easy integration of industry standard third-party tracking tools for including AdsBridge, BeMob, Cake, Kochava and Voluum, to name but a few.

What Third-Party Platforms can be integrated with Ad Servers?

There are many additional third-party platforms that the ad server should offer the ability to integrate with. When using an ad serving platform like EXADS the purpose is to grow a business and create a network of clients to monetize and enable the clients that use the ad serving platform to also monetize with ease. The ad server should be able to integrate with:

What are White Label Ad Servers?

A white label ad server platform enables any business to instantly set up their own ad network. ‘White labeling’ basically means that the business has the ability to rebrand the UI of the ad serving platform with their own logo, brand colours with primary, secondary and tertiary colours for UI buttons, labels, charts and texts along with their own unique domain for ad serving. EXADS is a white label ad server and allows you to fully brand the ad serving platform. Check out our blog post: Why Choose a White Label Ad Server?

What are the Key Features an Ad Server should have?

The more features an ad server has the more competitive it will be. Having great features will attract more clients and the ad server should have excellent documentation explaining how each feature works.

Ad servers can also offer automation tools for Advertisers. Working like smart assistants, these tools save time for Advertisers by automatically optimizing and A/B testing for different sales funnels throughout their campaigns. For example EXADS ad server offers the following automation features:

Which is the Best Ad Server?

Choosing the best ad server depends on what your requirements from an ad server are. You can use a team of developers to build your own ad server from scratch, or build one using a third party cloud infrastructure tool. Both of these options require time and major investment. You can self-host with open source tools, or you can use a hosted, third-party white label ad server platform, like EXADS. This is the quickest and easiest option to get an ad server business up and running, with the added advantage that there is a team of developers already maintaining, optimizing and programming new features for you to use.