In our previous blog post Best ad server features for advertisers: The Bidder and Conversion Tracking, which you can read here, we highlighted two free advertiser features provided with our self-service ad serving platform: The Bidder and Conversion Tracking. So in this post we show you an advertising case study example. The advertising campaign case study demonstrates how both these features work together. The Bidder gives advertisers full control of their bidding optimization to block underperforming ad zones while ensuring that campaign bids are kept within the advertisers KPIs and budgets are not burned on non performing ad zones. Secondly, the Conversion Tracking feature gives advertisers real time data in order to see if the campaign is making a profit, break even or loss, in order for advertisers to make real time optimization decisions to generate a positive Return On Investment (ROI).

In this case study, the Advertiser wanted to optimize their ad campaign using The Bidder to clean out ad zones that didn’t perform, whilst tracking the overall campaign performance, using EXADS Conversion Tracking tool. This was a Dating offer targeting Mobile users. The Conversion flow was from a banner ad, to a Prelander, to the offer’s landing page.

First the advertiser set a new conversion goal, the Conversion Value was set to ‘Fixed’ with a value 5$. Setting the right Conversion Value is potentially the most important step in the process, since it represents the payout of the conversion and is used to calculate the Revenue, Profit and ROI of the campaign. See below: 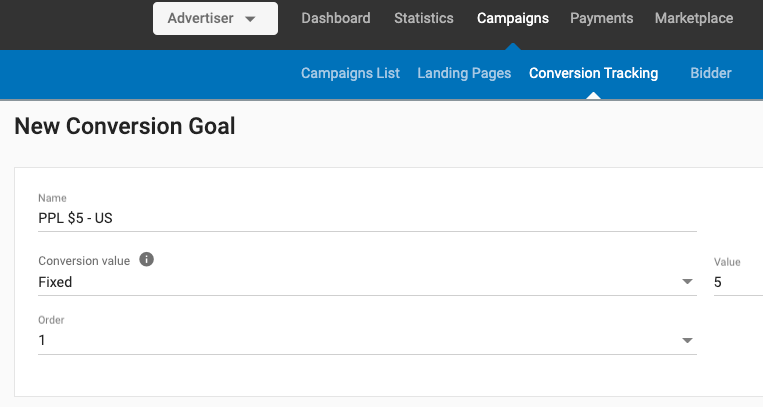 With this information set, the advertiser was able to see how much revenue he had made from each conversion and whether those conversions were covering the costs of a campaign.

As can be seen in the screenshot below, once the value was set, it was time to set the Automatic Bidder Optimization. The target Conversion value was set to $3 instead of using the initial Goal’s Conversion Value $5 to start testing. When setting Bidding Algorithms, it is recommended that the advertiser does not use his entire budget, this will leave enough room to test out a wide range of ad zones and sites, bearing in mind that some will not perform and will be blocked by The Bidder’s algorithm. Then, it is a good idea to start small and increase later to avoid spending all the budget at once. The Bidder algorithm will identify the zones that don’t perform as it learns the campaign’s behavior, in order to optimize bids and achieve set conversion goals.

For this Advertiser’s dating offer, under the category ‘Rules’, basic rules were set to be applied to all ad zones. This means that, with the rules set out in the screenshot below, once a specific zone generates 5,000 impressions, if the CTR is equal or inferior to 0.01%, the ad zone gets blocked.

After a few days of running the campaign, the advertiser could see how these rules affected the campaign. Because the Blocking rules and the Conversion Tracking method that the advertiser picked were ‘by Zone’ {zone_id}, it tracked the results of each zone that had been tested by the algorithm. As shown in the Campaign Statistics below The Bidder and the Conversion Tracking tool worked together to check how many leads were converted and how much of the set budget was spent, by zone.

On the far right column (New/Old Bid) The Bidder adjusted the zone’s bid automatically: ‘Old’ refers to the initial bid, and ‘New’ is the automatic adjustment that has been prompted by the Bidder to optimize results. This demonstrates that in this case study, for some ad zones, the bidding price was adjusted to be under the original spending. 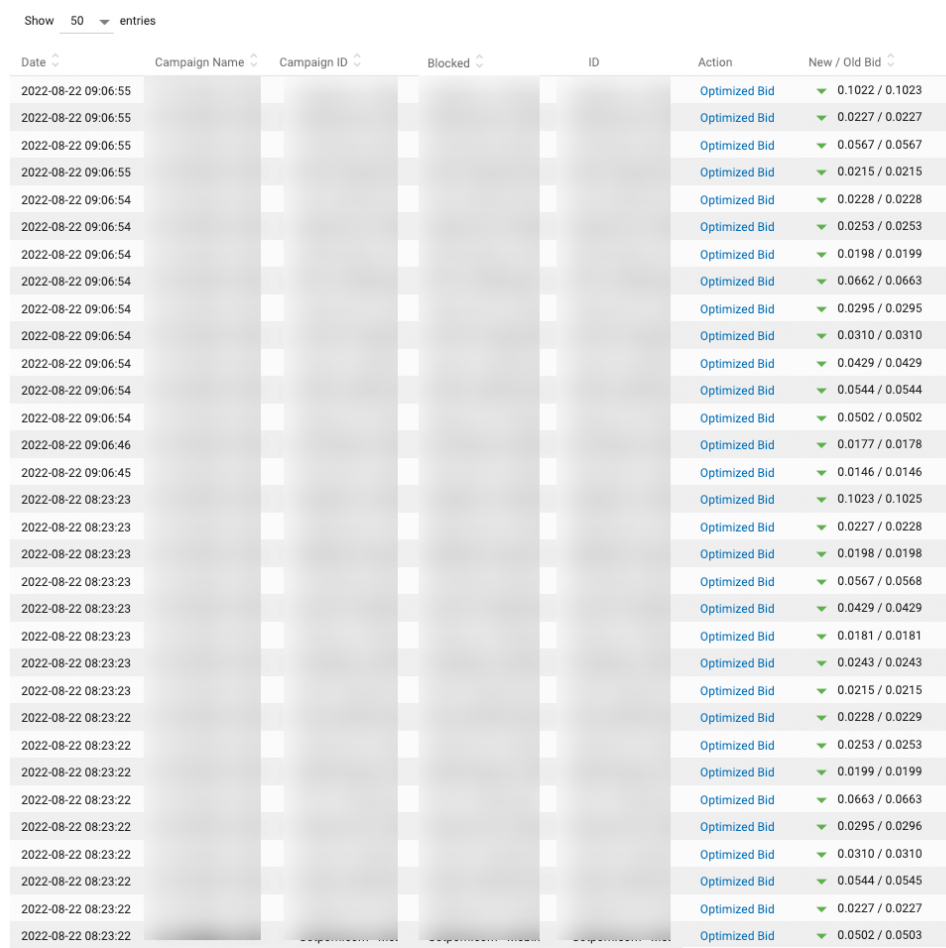 Finally, the advertiser used the Conversion Tracking feature to check the overall campaign evolution and how The Bidder’s algorithm affected it, as can be seen in the screenshot below. The Advertiser launched the campaign on 2022-08-01, starting from a single bid that kept getting adjusted, and the campaign kept running, the algorithm kept learning and working until the trend in ‘Profit’ and ‘ROI’ evolved from negative to positive.

In this case, the eCPA decreased until reaching below $5, which showed green numbers for ‘Profit’ and ‘ROI’. From 2022-08-13, the Advertiser started making a profit, after a couple of weeks of testing. This may seem like a long time to run the campaign before making gains, but this is a normal trend tendency, because it will take some time for the bidding algorithms to test out all of the ad zones and select only the performing ones. For this reason, it is key for advertisers to devote some time and budget to testing pre-launch.

In the ‘Impressions’ column you can see that the Advertiser’s campaign kept decreasing. Again, this as a result of non-performing sites being blocked. An increase in Clicks as CTR was also observed as non-performing zones were blocked. 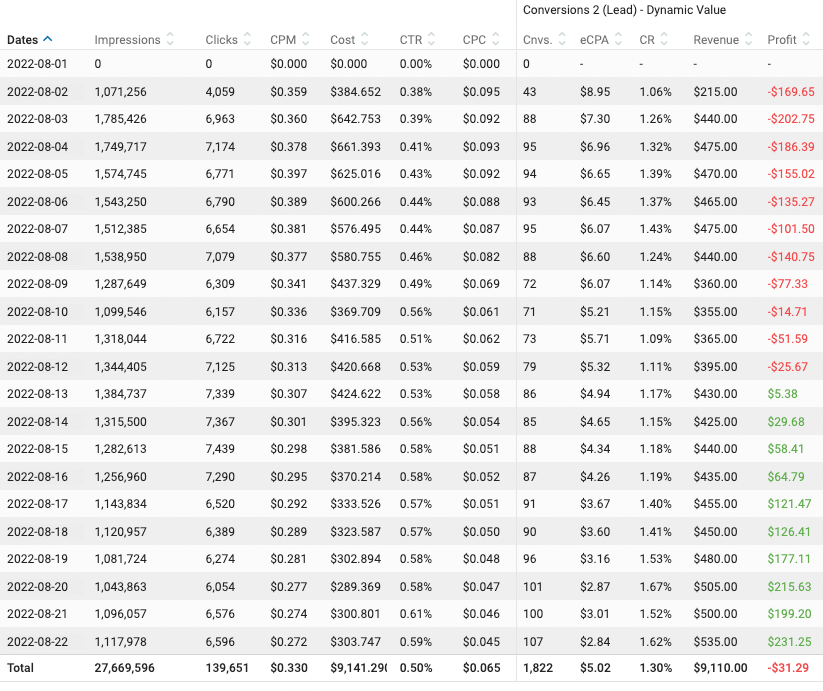 As you can see in the advertising case study example, EXADS white-label ad server provides two very powerful tools to automate bidding, block ad zones and for real-time optimization. These are just two of the rich list of features that EXADS self service ad serving platform provides, without any additional costs. Whether you are a network,  publisher, or an advertiser, discover what other powerful features we offer by getting in touch today!

UX design is an integral part of ad tech. At EXADS, our UX Design team is dedicated to designing meaningful user experiences and making the lives of our users easier, simpler, and more enjoyable.

Using EXADS as your white-label ad server comes with a host of free automation and optimization tools that your advertiser clients can use. In this article we look at The Bidder and Conversion Tracking features.